Quebec has always been the province with the highest tenancy rate in Canada and rising home prices and strict rules on rent increases have maintained tenancy as an attractive option.  But since the 1970s, Quebec has also seen Canada`s  highest rate of increase in home ownership.  There was a lot of attitudinal catching-up to do and smart, confident younger Quebecers have jumped onto the ownership train at a pace that outstrips the increase in all other provinces. Nevertheless, Quebec still trails the total home ownership rate of every other province Canada.  (http://fciq.ca/pdf/mot_economiste/me_102013_a.pdf)

I just read a well-written, concise overview of real estate trends emerging as Millennials take over Boomers and Gen Xers as the drivers of change.   One aspect that interested me is the tendency for Millennials to  live where they work and play and choose renting over owning.

You can see this in communities like Mile End and Villeray, where burgeoning tech communities employ Millennials by the hundreds, and even manufactured neighborhoods like Griffintown, where incubators, start-ups and trendy cafés have displaced antique shops and surplus stores.  These areas have seen huge transitions in population in recent years; streets are bustling, restaurants are full, young people are out spending money and business is good.

Millennials across North America may prefer renting to owning but I am  seeing something different in Montreal.  Properties for sale, especially duplexes, in areas that are still affordable but adjacent to where the Millennials want to work and play, are still getting multiple offers and often selling at over asking price.   The buyers are young, savvy and bent on transforming, succeeding and creating a reality that reflects their ideals.  They are a smart bunch, these ones, and they have easy access to reams of information.  They understand things in a way we did not at their age.  They may prefer the flexibility of renting, but if ownership proves to be the financially smarter choice, count them in.  Villeray is not the Plateau but it is close enough to walk, is architecturally adorable and provides opportunity.  Verdun is not Point St-Charles but with easy access to métros and a funky commercial street like Wellington, it has become even more of a community than the surrounding GenX hotspots like St-Henri and the Point. 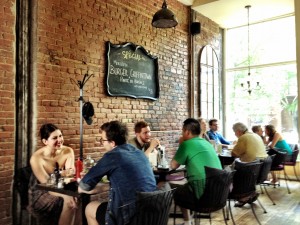 I cannot say for other areas of Quebec, but I believe Montreal is living a different Millennial reality than many other urban centers; yes they have the same tendencies, trends, desires and characteristics, but there is a convergence between that and  the undeniable momentum of increased home ownership and financial intelligence that is skewing the conclusion.
Granted, the Millennials are still a young group, barely old enough to start thinking about things like settling down and having families.  Perhaps as they mellow into their middle years the frenetic pace of downtown living will have worn out it's welcome and they too will want to  head to the burbs for a quiet respite and a bit of nostalgia.  Whatever the case, it is fascinating to watch and be part of!