How To Sell Your Home For More

How To Increase Your Selling Price By Thousands. Compared to many other provinces and states, Home Staging is a relatively recent addition to the real estate world in Quebec, and is still not practiced in many areas outside our metropolitan centres.  The fact is, you would be hard pressed to find a better return on your investment.  Whether you are increasing your selling price, shortening your time on the market or both, proper presentation of your home for sale is critical to getting your home sold.

Take a look at the enclosed before and afters and the accompanying descriptions, see for yourself how a bit of money and the right creative ideas can go a long way towards helping you reach your goal of moving on!!

Listed twice but unsold previous to me, this was a condo with great potential but no wow.  The owner was a lovely elderly woman who had decorated her home with her fondest memories; souvenirs from travels abroad, family antiques, artificial flowers and a variety of collectibles, all pretty in their own right, but overwhelming when presented together.

By the time I interviewed for the mandate, she was fed up with having her home on the market and just wanted to move on.  I gave her my honest opinion; the target buyer was a young professional or a young international McGill student and that kind of person would never be able to envision themselves in her condo in the state it was in.  The sale would be based on price, not on love. She insisted there was no question of lowering the price, so I offered to bring in a decorator to see what we could do on the desirability end.  My client was reluctant to agree, but once we got there for the meeting, she was ready to make some changes.

Not wanting to chance a change of heart, the decorator and I spent a few minutes looking around and then, with Madame’s permission, got to work.  An astonishing amount of stuff came off walls and tabletops, stored temporarily in bathrooms, under beds and in kitchen cupboards.  After a few hours, we moved onto furniture placement.  With so many pieces, the place looked tiny and cramped; we needed to give it some space to breathe!

Once the owner had removed, donated or stored all the extraneous "stuff", professional photos were taken and web marketing began.   The condo was listed at the same price as before, but thanks to the new look, it sold in 34 days... to an international businesswoman for her McGill university student daughter.  They had fallen in love with it!

Here are some before and afters of the work of stager Patricia Turlington.  Total investment 5 hours of staging, result:  sold in 34 days vs a previous 346 days on the market. 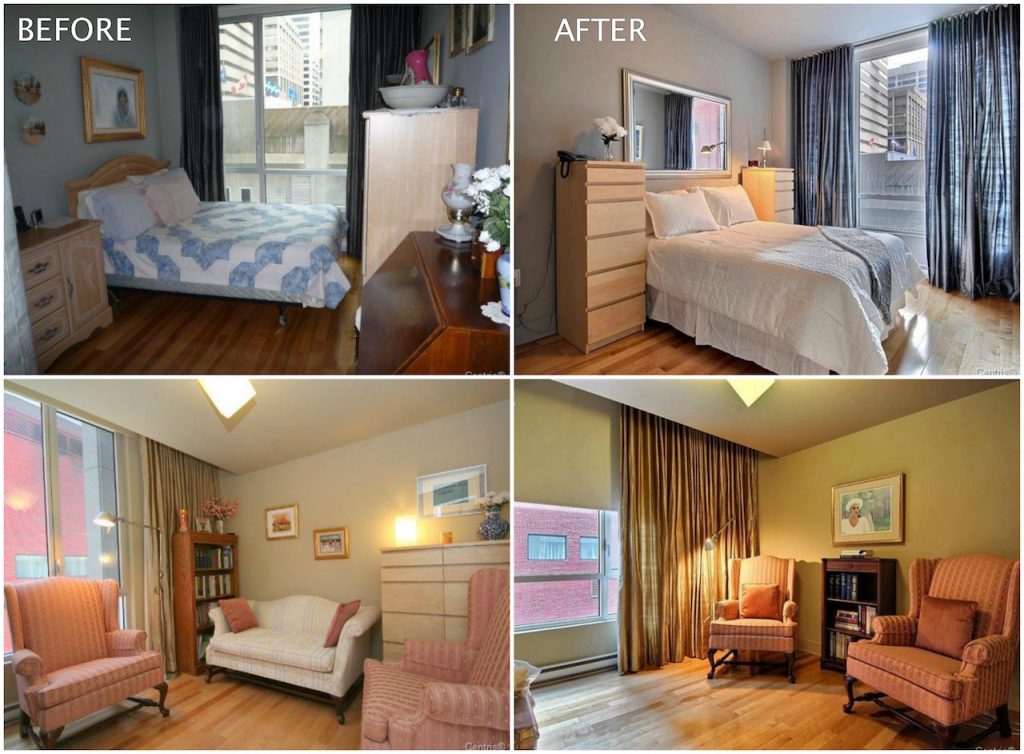 “It was the best of times, it was the worst of times…”And Just When you Thought it Was One Thing, It Turns Out To Be Something Else!On Letting Go, Empathy, and PatienceBoom or Bubble? Buy now or wait?December InfoletterThe invisiblesResidential Sales Increase by 3 Per Cent in JuneThe Real Estate Market Remained Very Active in MayBidding Wars on the Rise in QuébecSales Jump by 13% in April
All articles
1100 Robert-Bourassa #104
Montréal , H3B3A5
514-868-1111